Island of the Lost 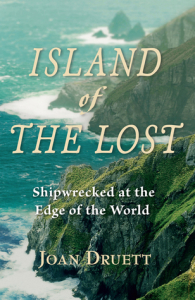 Island of the Lost

Every now and again, a person ought to be reminded that there have gone before us men and women in far worse circumstances than those we face and who not only survived, but brought others with them through hardship. But we should also learn that hardships are genuinely…hard, and that while some survive to fight another day, many others fall apart and fail. Island of the Lost details such a story which seemingly only providence can provide.

In 1864 Thomas Musgrave and four other men set sail from Australia in the Grafton to prospect Auckland Island, 285 miles south of the southern tip of New Zealand. When they shipwrecked, they realized that they were alone and nobody was coming to get them. The island was an inhospitable, windblown, freezing, wet place. Survival would be difficult at best, but it would only to temporary until they could find a way off the island. Remarkably, at the same time, another ship, the Invercauld, wrecked on another part of the island, only 20 miles away, but impassable due to the terrain.

The 19 men of the Invercauld almost immediately set upon one another after their captain falls apart int he face of adversity. In almost no time the men are at each other, resort to cannibalism, and only three survive to be rescued by a ship that had no idea that the Grafton and crew are alive on Auckland Island. So what was the difference?

Captain Musgrave set about first and foremost with a vision, namely, to remain civilized during their ordeal. He felt that if they did so they could overcome any obstacles. And indeed they did. The five men built a cabin to live in, and almost unbelievably, a forge, with which they made their own tools to get off the island. None of the men had ever done that, but they banded together for the common good. And the civilized trust that they built up engendered trust for perhaps the most difficult part of the ordeal. Musgrave declared at one point, “If men abandon us, let us save ourselves.” So they did by salvaging what they could from their ship and reinforcing a small boat. When Musgrave finally sailed off the island, it was not with the whole crew. He promised to come back to rescue the rest, and he made good on that promise.

Druett makes the case that the differences in crew came from moral fibre and the character of the captains. Musgrave’s first reading from scripture on the first sunny day was Christ’s exhortation to love one another. He ensures that duties are rotated among the men, that they all play chess and read, and that they are thankful for even the toughest and least appetizing seals that they kill, offering our throw-away society today this pearl of wisdom: “This is picnicking in reality.”

For today’s leaders, we can learn from Musgrave that maintaining a close and fraternal culture within an organization keeps people working towards a common end. He believed it was more important to live or die as civilized men than to fight one another to see who could make it. If you treat your people like Musgrave did, they will want to “stay home” and “bloom where they’re planted” rather than looking to jump to the next good opportunity. Your ship doesn’t have to be huge to be strong, but it needs an active, civilizing leader like Musgrave, who sets out a clear vision and helps to keep his people on it and whose people know for certain they will never be abandoned.

Read the book. You’ll be really happy you did.

This site uses Akismet to reduce spam. Learn how your comment data is processed.

Truth Doesn’t Change Based on the Rank of the Recipient

Just because your report may necessarily lead to action by auditors or even the United States doesn’t mean you shouldn’t report it up your chain.

If your organization is undermanned, untrained or ill-equipped, reporting it as fully qualified doesn’t make your peoples’ job any easier or make you succeed against competitors.
3 of 9

Focus on the Mission; Bury the Queep or it Will Bury You

Never forget what you are sworn and paid to do – your mission; you must take care of the minutiae every morning and then get on with your real work; sometimes it IS your real work.

You should spend your valuable staff meeting time on mission-related issues only; the colors of your slides, the fonts on your lettering, the templates on your papers is all stuff to be sent out in a note from the boss instead of being discussed in staff meetings.

There will always be petty taskers and inquiries from above; deal with them and move on.
4 of 9