On Travel and Its Importance To You 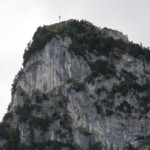 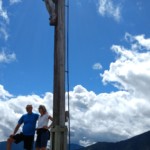 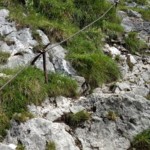 Climbing aids to get to top of mountain 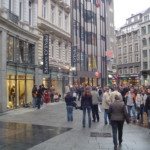 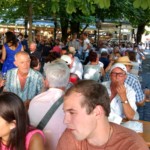 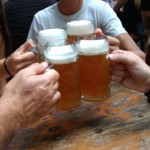 Flagons at the inn at the end of the road

“Someone hauled that wood up here.”

That was one key point of discussion when our family stood atop the Kofel, a small, but steep granite mountain on the west side of Oberammergau in the Ammergauer Alps of Germany. You don’t need to be an experienced mountaineer to get to the top. The thick cables and chains anchored into the granite help you manage the steepest part of the climb. But going up with a backpack is hard enough. I can’t imagine climbing up, then hauling a 20 foot beam, a 10 foot beam, and a larger than life hand-carved corpus to place upon the cross. It is hard to take your eyes off the panoramic view of the Alps and the villages below, but it is also hard to take your eyes off the large crucifix and thinking of the men who climbed the mountain to put it there.

That made me think about the men who dug and blasted out the Kentucky Belle Mine a hundred feet below the top of a cliff above East Willow Creek in Creede, Colorado, in the late 1800s. Strong and brave men led mules up and around a mountain, then lowered miners on ropes to dig and blast away a mine entrance from which they could dig and blast a mine from which they could lower silver ore in buckets to the road next to the creek bed. Someone did that. By hand.

That ore gave support to those midwestern farmers, southern cotton growers, Colorado miners, and Democrats opposed to Republican East Coast bankers who wanted gold backing for money so that they benefited from payment backed by gold. Without the miners in Creede, Silverton, Eureka, and other small mining towns, risking their lives, Populism, as a mass political movement, might not have had years of success in electing representatives and senators to Congress, and William Jennings Bryan might not have been nominated three times for President.

Without travel, I never would have been able to make that connection between the cross atop the Kofel and the Kentucky Belle Mine. Whether or not anyone thinks those connections are important, I’ll contend they are.

I’ll start with the premise that people don’t climb mountains hauling heavy wood unless they think it important. The miners, obviously thought it important as they were being paid to do so. But the Bavarian villagers who hauled wood for crosses atop countless peaks across the Alps weren’t doing it for pay. Yet it was important enough for them to do it. Culturally important. That cultural importance ought to make anyone doing business in that region or with someone from that region slow down and take that culture into consideration for how it will affect your business relationship.

If you’re headed to Munich and Hamburg for business, it really behooves you to know how different these cities are, how different their cultures are, and how differently their people think. Their people live in the same country, but they are not countrymen. Their cultural differences may make it difficult for you to land a deal if you treat people from the two cities as though they were the generic German.

Hamburg, a port city, saw sights, smells, and sounds from all over the world from its founding to the present. It was a city of immigrants. It was a city of imports. It was cosmopolitan. It was and is Protestant. Hamburg was consistently rebuilt over the centuries every time a fire raged and burned down the town. After the horrific firebombing of World War II, it rebuilt in concrete, glass and steel.

Munich was a principal city of the Holy Roman Empire, a city who produced two emperors, a city referred to by many Italians as the northernmost Italian city. It has 365 Catholic parish churches, more than even Rome. It, too, was firebombed in WWII. But instead of being rebuilt in the modern architecture, an army of old women brushed off bricks and the city rebuilt from the rubble according to the architectural plans of the original buildings from the 1600s and 1700s.

But you won’t know this if you don’t travel. Yes, you can read about it just like you read here. But most of what you read in travel writing is surface level information meant to help a traveler not get stuck, to enjoy popular tourist locations, etc. It tells you about who is a good chef, where the best deals can be found. If you want to do business, you need to spend time learning the local culture before getting down to business. Furthermore, if you want to see your own town or city with fresh eyes, you ought to really consider traveling outside of it.

In “The Riddle of the Ivy” in his Tremendous Trifles, G.K. Chesterton’s character is asked by his friend why he is packing a suitcase. He replies that he is traveling through several cities in the continent of Europe searching for the Battersea neighborhood of London. When his friend asks whether or not he realizes he is actually in Battersea, Chesterton replies:

“I cannot see any Battersea here; I cannot see any London or any England. I cannot see that door. I cannot see that chair: because a cloud of sleep and custom has come across my eyes. The only way to get back to them is to go somewhere else; and that is the real object of travel and the real pleasure of holidays. Do you suppose that I go to France in order to see France? Do you suppose that I go to Germany in order to see Germany? I shall enjoy them both; but it is not them that I am seeking. I am seeking Battersea. The whole object of travel is not to set foot on foreign land; it is at last to set foot on one’s own country as a foreign land.“

In his The Innocents Abroad, Mark Twain said “Travel is fatal to prejudice, bigotry and narrow-mindedness, and many of our people need it sorely on these accounts. Broad, wholesome, charitable views of men cannot be acquired by vegetating in one little corner of Earth all one’s lifetime.”

Anyone spending an hour or more in any of Munich’s countless beer gardens, such as the public Viktuelmarkt, will see strangers sitting with strangers at common tables eating food, drinking beers, and partaking in spontaneous conversations. It may be old Hans and his dog from Munich, or two sisters visiting from a farming village for the day, or study-abroad students from India and Indiana. But the ubiquity of these common tables, not just at the beer gardens but in restaurants as well speaks to the preservation of the culture of eating in a common room back in the middle ages. Something of that culture is important enough to this entire region that it guards it and perpetuates it. THAT makes it important enough for people to take note and figure out how it applies to what you do.

Seeing Bavarians, young and old, conservative or liberal, all wearing their traditional clothing at church on Sunday and at concerts and at plays tells you something about the culture. They may sport an earring and use a smart phone app for a ride home, but a group of men wearing their lederhosen at the bar in the middle of winter when there aren’t tourists around to see them tells you the importance of the custom. How does that custom affect business and your likelihood of landing a deal? You probably won’t find discussion of this topic on Wikipedia or travel magazines. You need to go there yourself to see or humbly and genuinely ask your foreign colleagues right out bout their culture and how it impacts their lives.

Some might argue that travel is for the elites who can afford to get on a plane to another continent, or for the famous who can get away from their followers to hang out with their own out of the eyes of paparazzi in Swiss villages. And I know first hand that travel can be expensive. But I also know first hand how rewarding it is to save money to take the family overseas to see things they wouldn’t see. To save to see family in Serbia, and the palace where the Roman Emperor Trajan lived while building a bridge across the Danube, takes a long time, but is well worth the cost when we consider how much we and our kids learn that we can apply to situations in our daily lives here int he US. No, it isn’t cheap, but neither are vacations to Panama City, or Disney Cruises, where people get away with those who look and sound just like them.

Please don’t think I’m saying that people aren’t good or proper if they don’t go overseas on vacation. We take lots of vacations here in the US or very close to home. My point is that getting away from your local situation can be very good for your family and business life. You will see things that will make you think and draw connections to other things that can help you in your local life back home and in your business life at work.

And if you are interested in taking a deliberate senior executive or mid-manager trip abroad to experience some of these cultural variations and maybe even climb a mountain, take a look into the BGCTS Leadership Experience and see if it is right for you. If you just want to talk about potential travel locations and how they might affect your business, contact me and maybe we can discuss it.

But most importantly, I challenge you all to save some money and take a trip to somewhere you’ve never been and try to make connections of everything you see to something back home. You might be surprised.

Whether you are traveling alone or with family or colleagues, try to remember that at the end of the day you ought to reflect on that day over a meal in a local establishment. Once again, Chesterton can be our guide. When writing on Charles Dickens and his impact on our culture, Chesterton wrote: “The inn does not point to the road; the road points to the inn. And all roads point at last to an ultimate inn, where we shall meet Dickens and all his characters, and when we drink again it shall be from the great flagons in the tavern at the end of the world.”

About the Author: Tom Ruby

Tom Ruby is CEO of Bluegrass Critical Thinking Solutions. With a decade of corporate small business consulting experience, he looks forward to helping you take your time back and balance your inherent desire to work on the details with your real need to focus on corporate vision. A retired Air Force Colonel who served 26 years on active duty in positions from Squadron Intelligence Officer to Director of Special Programs with a $4 billion annual program portfolio, he carefully crafted expertise in strategic planning, program management and leadership development. He was Associate Dean of the Air Command and Staff College where he developed exchange programs with the NATO School, the French École Militaire, the German General Staff College and Poland’s National Defense University. He served on General Petraeus’ Joint Strategic Assessment Team as well as in three combat deployments. He holds a PhD in Political Science from the University of Kentucky, and actively mentors graduate students through the American Political Science Association. He is widely published and speaks globally on topics from critical thinking, to leadership, to strategy, to morality in warfare.

This site uses Akismet to reduce spam. Learn how your comment data is processed.